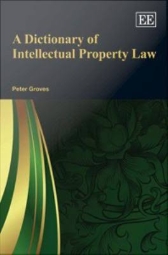 Hardcopy dictionaries are probably a species in danger of fast extinction considering the competing practicality, sustainability and climate-friendly availability of both mobile and cloud-based technologies. What is perhaps even rarer is an ever-evolving dictionary, harvested from a blog and informed by a community of subscribers, a state of which was frozen into print, in 2011. Indeed, Peter Groves’ Dictionary of intellectual property Law is inspired by a companion blog with the same name as the print version (http://www.dictionaryofiplaw.com/) where readers are invited to post comments, critiques and entry/header suggestions.

Peter Groves’ Dictionary of Intellectual Property Law is also part of a rare species of dictionaries that reads like a fascinating A to Z book! Each definition of an IP term appears as a short (sometimes even single sentence) or longer stand-alone paragraph, with none of the other usual information such as etymology, pronunciation, potential synonyms, lists of possible meanings depending on the particular context, columns, or other sorts of systematic categorization. This does not mean that grammatical functions (e.g.; noun verb or adjective) or pronunciation never appear in any of the definitions, nor any of the other categories, or even translations to English for foreign terms. Clearly they do, since Groves’ definition of a “patent”, for example, includes both grammatical and pronunciation information.  Indeed, the definition for patent is organized into three paragraphs for noun, adjective and verb forms of the term patent, and both the short and long vowel “a” pronunciations are distinguished as American and British English variations. The point, however, is that these categories do not systematically organize all of the entries, as they might in other sorts of dictionaries, which one might not use as armchair reading.

Peter Groves’ credentials appear important within the context of a dictionary of IP Law that treks off the beaten path. This is, after all, a dictionary that was harvested from a blog and that reads like a book, containing very personally authored definitions.  Peter Groves is a British Solicitor (i.e.; an attorney) who consults for a British firm called C.J. Jones Solicitors, LLP. He is also the author of another blog called Ipso Jure Blog (www.issojure.co.uk) among many other career items listed in the blog tab “About me”. This dictionary of intellectual property law is thus explicitly concerned with English law. However, since patents, trademarks and copyrights, are international, even of global scope, and the rights conferred extend to ever increasing geo-political spheres, it would truly be impossible to write a national IP dictionary!  For example, the first definition of this dictionary is for “1-click” (cross-referenced to One-click), the Amazon method of ordering an item with a single click, whose activity spans 16 countries (including, Great Britain, China and India!). Thus, one of the great merits of this dictionary is certainly to have recognized the planetary proportions of IP law, and to have included so many terms from “other English-speaking jurisdictions… and in other languages too”, culled from both US, European and PCT patent law.

The entry just after “One-click” is “Open-Source”, an alternative way of licensing software which enables users to modify the source code and to “Copyleft” the modified versions of the original code (www.opensource.com). Consequently, there is also an entry for “Copyleft” defined as a way of subverting existing Copyright laws which place restrictions on the distribution and modification of an existing copyrighted version of a work. Copylefted versions extend licensing rights to a version of a work that has been modified providing that the original is included with the modification. Thus, where a Copyright owner “reserves all rights”, a Copyleft owner “reserves some rights”, to the modifications and improvements, and in turn is required to license Copyleft versions.

BREXIT rules!! Even if many terms pertaining to European patent law are glossed in this wonderful dictionary, the term “European Patent” is actually glossed as: “A misnomer. There is really no such thing as a European Patent, although the national patents granted under the EPC are called by that name […]”. Of course, Peter Groves readily admits he is being a bit facetious (Personal communication dated Oct. 14, 2016). Still, with all due respect, this misnomer definition appears a bit misleading.

European Patents definitely exist as unbundled documents, separate from a family of patents granted nationally, and conferring certain rights. As evidence, I am linking one such EP rogue patents, displaying just 3 designated contracting states (DE, FR and GB) for which yearly dues are computed. Incidentally, EP 0672994A1, titled Method and apparatus for reading an optically two-dimensional code was granted for the QR Code invention, winner in 2014 of the EPO award in the popular vote category. An award, that can be bestowed only upon an inventor who has been granted a EP patent for his or her invention. Thus, you will find thousands more such EP patents recorded in the Espacenet database.

Moving forward, Peter Groves’ Dictionary of Intellectual Property Law contains more than one most welcome inclusion. For example, the term “Traditional knowledge” (TK), defined as “The knowledge held by particular communities, especially indigenous peoples” is particularly welcome. And especially, since the rest of the definition for TK highlights such issues as the absence of a universal legal framework for protection, despite the emerging recognition of TK as intellectual property. Additionally, this definition  concludes with the much cited case of a Turmeric patent (US5401504),which together with an earlier Neem tree patent (EP0436257) were the first patents to be revoked (respectively in the US and Europe) on the grounds of prior art existing in the form of TK, and thus the absence of novelty.

In the fast and fluid domain of legislation, the 2011 publication date of this dictionary coincides with passage in the US of the largest US Federal Patent Law reform since the codification of US patent law into Title 35. The Leahy-Smith America Invents Act, whereby the US changed from the “first to invent” system to a “first to file system”, was signed by President Obama on September 16, 2011, effective for all patent applications filed in 2013 and onwards.  Thus, the entry on the “First to Invent” already needs some revisions, which is one of the reasons why the second edition of Groves’ Dictionary of Intellectual Property Law, is already a much-anticipated publication.

In the interim, this is an IP dictionary that also has the merit of being interesting for all the surprises that arise upon careful reading. For example, one eagerly looks for Peter Groves’ take on trade marks (two nouns) for which there is also a separate trademark (single noun) entry, covering US and UK variations in signifier. However, the real surprise arises in the separate entry for the verb trade mark (or trademark), which according to Groves must “logically be confined to applying a trade mark to goods” rather than “the act of registering a trade mark or even the mere act of applying to register for a trademark”.  This surprising restriction on the definition of the verb form of “trademark/trade mark” could send you flipping pages back for Grove’s take on the definition of “plain or literal meaning” per US regulations and/or British Rules, in the domain of IP law. However, you might only find such an entry for “plain or literal meaning” in the much anticipated second edition of this dictionary.

Grove’s Dictionary of IP Law is otherwise unrestricted to a particular country or continent in the choice of terms. Where else will you find the terms kokai (an unexamined Japanese patent application) and kokoku (an examined and allowed Japanese patent application), listed with in conjunction with Octrooi (Dutch for patent – or more generally, an official document conferring a privilege […]), the Russian term Samizdat (“literally, ‘self-published’ as was the frequent practice among dissidents of the former Soviet Union”);  the French saisie descriptive (“A court-order available in France, authorising a bailiff to collect evidence of the alleged infringement at the defendant’s premises by (for example) taking photographs […] or buying samples”), and the Spanish acronym MERCOSUR (Mercado Común del Sur, a free trade organization comprising the southernmost countries in South America)?

I definitely enjoying every little bit of it. It is a great website and nice share. I want to thank you. Good job! You guys do a great blog, and have some great contents. Keep up the good work.
SuperoShoes

Greatest thanks to Dr Oyagu for his herbal drugs that he prepared for me and when i start using it in just 2weeks i was completely cured and that ended my HERPES SIMPLEX 1&2 DISEASE i am so happy and grateful to Dr Oyagu . after reading about him on a testimony of Jason Cash on a blogger. i knew suddenly Dr Oyagu was the right Doctor to cure my HERPES SIMPLEX 1&2 DISEASE. i discuss with Dr Oyagu and he prepared a herbal medicine for me and when it got sent to me in south korean . i used the herbal medicine and 2weeks and i went to check up again. after 15years of suffering from HERPES SIMPLEX 1&2 at last i am smiling once again. Dr Oyagu also has remedy to others disease like COLD SORES,HIV/AIDS,DIABETES.CANCER,HIGH BLOOD PRESSURE AND MANY MORE. I oblige everyone to contact this powerful herbalist Dr Oyagu and be free from your suffering. contact his WhatsApp line: +2348101755322 or his Email:Oyaguherbalhome@gmail.com

I want you all to help me thank Dr Irosi for saving my life, i was diagnosed of HIV and at the same time i was 7 months pregnant, i was confused and i didn't know what to do until i meant a friend on the Internet who directed me to Dr Irosi, i did not believe it until i contacted the good man who was able to help me out of the situation with his herbs, it only cost me some little amount of money for me to cure my HIV through the help of Dr Irosi. So i will also advise anybody that needs help from him should contact him because i know you will also get cured of your disease. Thanks once again Dr Irosi. Anyone who needs help having the same disease or more should contact him on his email drirosisolutioncenter@gmail.com or call/whatsapp him via:+2348118829771

Great write-up, I am a big believer in commenting on blogs to inform the blog writers know that they’ve added something worthwhile to the world wide web!.. Types of business planning documents 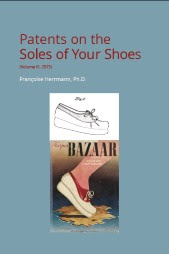